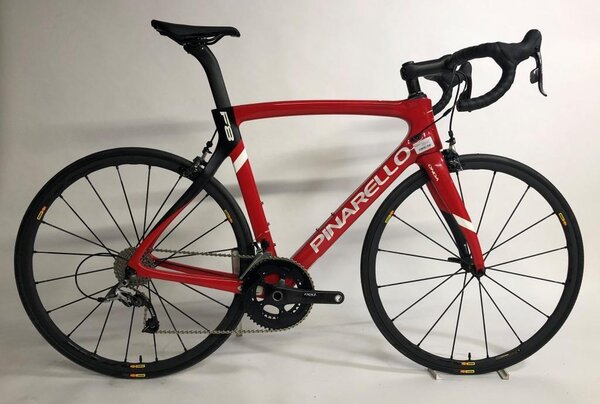 The directive from Team Sky was simple: 'the same, but faster.' That was the spark that led to the Pinarello Dogma F8. The Dogma 65.1, the bike that won just about all there was to win in 2013, wasn't good enough for them. As a team, the most fearsom Grand Tour squad on the planet, they look for gains wherever they can be found, and hope that if they improve everything, even if it's just a little bit here and there, it will add up to real, race-winning differences.

'Same, but faster' could be confounding to a company that prides itself on making bikes for the best in the world and an incredible success record over the years. But Pinarello embraced the challenge. Sky sweetened the pot by enlisting their sponsor Jaguar Land Rover, which provides not only cars to the team but wind-tunnel expertise.

Pinarello decided to keep the 65.1's geometry, which has been proven over the years, and is the foundation for a great ride. Everything else was on the table. Jaguar helped design the tube shapes, finding what worked, and what worked better. Just about every frame tube was tweaked in some fashion. The fork legs splay out a bit wider for better aerodynamics. The fork crown helps smooth the airflow around the front brake. The head tube has a more pronounced nose, though still within the UCI's 3:1 ratio. The top tube was flattened. The down tube and seat tube and seat post were changed to what Pinarello is calling a "flatback profile." It's a truncated airfoil that tricks the wind into thinking the tube is longer than it is. The seat stay attaches to the seat tube at a lower point, and the monostay top is shaped to shroud the rear brake. The seat post clamp was integrated into the frame and the fixing mechanism hidden from the wind. Even the enormously popular Onda wavy stays and fork have been refined to simpler, more aero curves. Bottle cage placement was even investigated. The result is 3Xair bolts on the seat tube. There are cage bolts. Use the middle and lower for better aerodynamics and better weight positioning. Use the upper and middle if you want to reach the bottle easier.

The shaping wasn't the only change. The shapes have a second purpose; increasing rigidity to improve pedaling efficiency. In many cases, the new shapes meant less material and structures better able to resist torsional forces. The carbon lay-up had been modified as well. Highlighting the changes is Pinarello's use of Torayca's T1100 1K carbon, which helps reduce weight and increase stiffness further.

The improvements continue beyond the realm of the theoretical to the practical. Knowing that some riders utilizing electronic shifting like to slam their stems, the top of the head tube has been re shaped to better accommodate electronic junction boxes. The Think2 mechanical/electronic internal routing has been kept, with smoother refinement of the ports, including an exit port on the right rear dropout. If the bike is set up for electronics, the battery hides from the wind in the seat post. The front derailleur hanger is removable. This is both in case it gets damaged and for people looking to lighten their ride as much as possible if they're setting up for a demanding hill climb.

After all these improvements, the question should be, "is it faster?" The answer is a resounding "yes." The frameset is 120g lighter in the 54cm size. It measures 12% stiffer overall, with 47% less aerodynamic impact. The fork works as a sail in certain wind conditions. The frame and fork together have 47% less drag than the previous Dogma, and come close to Pinarello's Bolide time trial frame. It's also 16% more balanced. Balanced. Remember Pinarello's embrace of asymmetry? It is still present, but more refined. As a result, the asymmetries they build in better counteract the pedaling forces on the frame. And out on the road, the bike provides a more lively ride.

As with earlier Dogma's, the F8 comes with a tapered 1-1/8" to 1-1/2" steerer. The bottom bracket is Italian-threaded. The included seat post is 300mm long and is secured via two 2.5mm Allen-head bolts behind the frame. It can be packed with Shimano's Di2 internal battery, Campagnolo's EPS V2 battery, or left empty. The dropouts are carbon-fiber for light weight.

The Pinarello Dogma F8, eighth revision of the Dogma from Fausto Pinarello, is a climbing bike, an aero bike, a bike that goes beyond one that already accrued 65 WorldTour victories.