Free Shipping on Orders Over $149, Excludes Bikes and Shoes | How to use a Gift Card Online 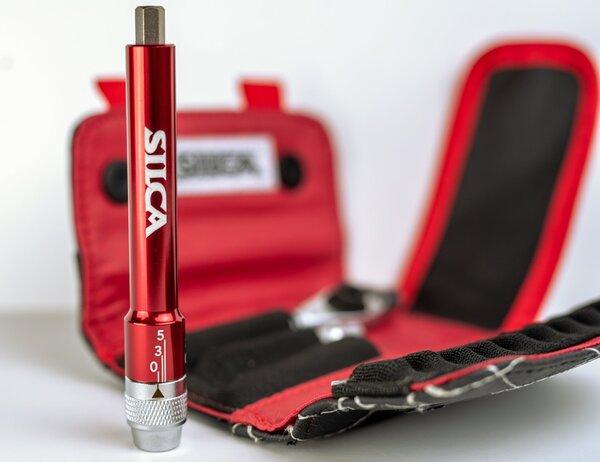 The world's smallest and lightest portable multi-tool with live 2-8Nm torque measurement. 72 Tooth micro ratchet and Swiss S2 Tool Steel bits for ultimate precision in the workshop and at the roadside.

The uncompromising cyclist who needs to make adjustments to fasteners on precision components without risk of damage.

This is the same great tool, but with a minor adjustment to the Ti Torque tube/barrel. The end of the barrel has been widened to accommodate larger numbers. This modification allows for greater visualization of the three separate nm scales. It's important to not over-torque; that action can result in damage to your tool. Without proper torque, you could also put your frame and components into jeopardy as well.

WHY WE DESIGNED IT:
Roughly 70%* of damage to high-end carbon components like seat posts, handlebars, and stems happen when making adjustments without using torque measurement. This problem is accentuated by the majority of adjustments occurring on the roadside or trail-side. T-Ratchet + Ti-Torque solves these problems by delivering a highly ergonomic tool with a torque measuring extender that provides real-time feedback as you are tightening the fastener. The Ti-Torque beam has three separate scales on it, 2-6, 3-5, and 4-8, which allow you to easily see when you’ve reached your desired torque setting. Ti-Torque weighs in at a mere 30 grams meaning you’ll hardly notice it’s there until you need it. The T-Ratchet uses interchangeable magnetic components to convert from a screwdriver to ratchet, to ratcheting T-Handle in seconds, which gives the user the ability to have several tools at once in an extremely small package.