Web Store Open Daily from 6am to 3pm 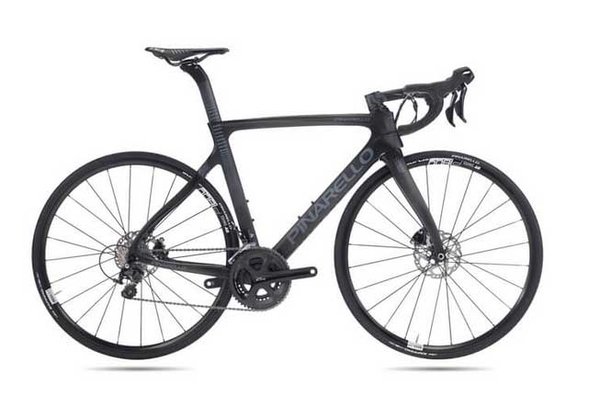 This item is currently not available.

Pinarello is well-known for their winning ways in the pro circuit, as seen by back-to-back wins in the Tour de France in five of the past six years. However, the price point of those high-performance machines usually outweighs the benefits of a bike like that for many. Fortunately, Pinarello have a bike that delivers Pinarello Dogma performance in a much more accessible package, accompanied by disc brakes: the Pinarello Gan Disk 105 Bike.

Pinarello start the Gan Disk frame design with Toray T600 carbon fiber, which has a tensile strength nearly as good as the high-end Dogma, while being a bit heavier and simpler in layup. Besides that, it shares many features with those Tour-winning bikes. Starting at the front is the Onda (Italian for “wave”) fork, which in conjunction with the 1 ?” to 1 ½” headtube, delivers excellent stiffness and precise handling. Thru axles front and rear further increase that feeling of directness. This is accompanied by Pinarello’s FlatBack tubing profile along the front triangle. These tubes are curved at the bottom and flat at the back for increased aerodynamics, while keeping weight low and stiffness high. Pinarello uses their Think Asymmetric profile as well for asymmetric tube profiles. As such, the Gan utilizes larger tubes on the frame’s drive side to emphasize stiffness where necessary, without excess material. Flex Stays for the seat and chainstays keep road chatter and vibration at bay, while accommodating a max 25c tire.

The value of any Pinarello is easily felt on the road, where its superior ride quality comes to the forefront. It handles climbing out-of-saddle sprints like many other mid and high-end carbon fiber road bikes, which is to say with efficiency and verve. However, it’s geometry is simply confidence-inspiring on descents. It corners with precision, without feeling twitchy like other bikes of this caliber. The bike also features the added value of disc brakes, which provide reliable stopping power under all conditions.