All Stores Will Be Closed July 4th 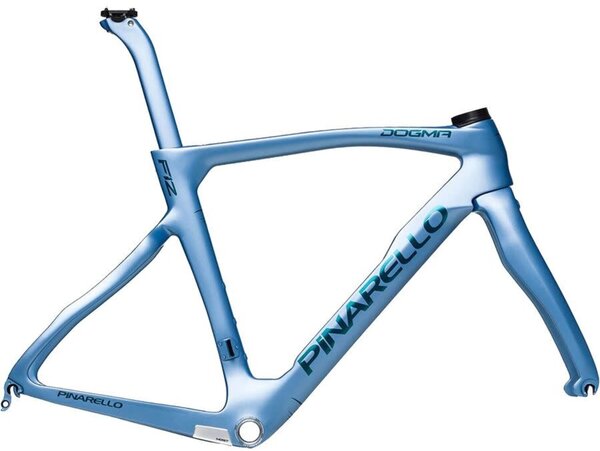 This item is currently not available.

Though the publicity that a brand gets through sponsoring a team should be helpful, in cycling that is not always the case. Nevertheless, the Pinarello Dogma F12, which must have been in the design phase for months going on years, should not be penalized because it has been launched at the same time as the main team it sponsors gets rebranded. It is in fact the latest addition in a long line of the Italian brand’s attempt to make the best possible bikes by finding that perfect mix of attributes.

The fact that Pinarello have stuck with the Dogma nomenclature indicates that this is an evolution of the already spectacular F10, and even the F8 before it. They haven’t reinvented the wheel here, mainly because they didn’t have to. The past several versions of the Dogma F series have been so good that it must be a real problem for the designers to think of where to go next. But who are we kidding? This is the cycling industry, and there are always little improvements that can be made even to the best products. Lighter, stiffer, faster is the name of the game, and that is exactly what the F12 gives us. Made from the Carbon Torayca T1100 1K Dream Carbon with Nanoalloy Technology that also formed the building blocks for the F10, Pinarello has refined the layering and neatened up the internals of the tubing in order to save weight and be even more efficient with the materials they use.

You’ll also notice that the tube shapes and profiles are different from previous members of the F series. They have done that largely in a bid to make the frame more aero. Their success is evident in the claim that they have managed to reduce drag by 7.3%, which translates into a saving of 8 watts at 40kmh, as compared to the F10. Now, most of us can admit without shame that the amount of time we spend in our rides at or above the 40km/h threshold is probably less than we would ideally like. And certainly less than Chris Froome. But that doesn’t mean that these sorts of improvements are wasted on us. Something else we will likely notice is how they make the frame so aero, as well as increase the stiffness compared to the F10, and still allow it to be as comfortable as it is. Though the level of segmentation in the frame market is severe, there would be no need for you to buy an “endurance bike” for longer rides, since the F12 is comfortable enough to be your steed for any ride of any length.

Additional design improvements come in the form of the internal cable routing that the new and improved Most cockpit. In fact, Pinarello designers took some very special care when developing the handlebar and headset interface in order to clean up that very important area in terms of aerodynamics. Integrating the cables and routing them through the bars and headset down to the brakes and gears improves not only the aerodynamics, but the functionality of the cable and the number of brake and gear combinations. And this new Most Ultra Talon sheds a lot of weight while increasing stiffness and enhancing aerodynamics.

The other noteworthy change for the F12 compared to the F10 is that now the frame has been designed to accommodate 28mm tires – and according to Pinarello, it can technically take even wider tires, though that would compromise the ISO 4210 standard. If you have tried putting 28mm tires on your Dogma 65.1 only to find that it was rubbing the interior of the fork crown and the rear monostay, then you will be super happy that the F12 will now be able to work with the rubber size of your preference. Of all the improvements, from the energy saving aerodynamics to the hammerable lateral stiffness, this wider tire capability might be the update that you will notice and appreciate most. Similarly, for the rim brake version of the bike, they have changed from single-bolt brakes to a direct-mount, increasing the braking capabilities.